This section allows you to view all posts made by this member. Note that you can only see posts made in areas you currently have access to.

Today at 03:36:18 PM
The Dynamics of Fashion (second edition), Elaine Stone, p20
Principles of Fashion
1. Consumers establish fashions by accepting or rejecting the styles offered. [..] No designer can be successful without the support and acceptance of the customer.
2. Fashions are not based on price.
3. Fashions are evolutionary in nature;  they are rarely revolutionary
4. No amount of sales promotion can change the direction in which fashions are moving. [..] cannot renew the life of a fading fashion unless the extent of change gives the fashion an altogether new appeal. This is why stores have markdown or clearance sales.
5. All fashions end in excess. [..] miniskirts of the 1960s finally because so short that the slightest movement caused a major problem in modesty. [..] Once the extreme in styling has been reached, a fashion is nearing its end.

Patterns / A bestiary of affects

paranoia, envy, animatedness, stuplimity... yet to read ngai's chapters on these

Ego and Emotion / How To Perform Intelligence

November 20, 2022, 08:16:04 AM
When you perform your intelligence, you're not supposed to explicitly say that you just learned about some narrow term of art that you're now using.

This is a useful observation. My first response was to take up arms, but luckily it was directed at someone else and not me (whose own tone I was already predisposed to dislike) which allowed me to slide into the analytical-learning stance much more easily.

(I need a better term than 'analytical-learning stance', but I don't know what; in the off chance I check this out later, it's the position where you can analyze your own actions from a place 'above' being hooked described by Frank Lantz in that one interview.)

I do this a lot, so I feel I need to do a bit more research into this dynamic in order to understand it.
4

November 19, 2022, 07:16:39 PM
I felt strangely exhausted by Salmon Run : it seemed like a futile effort, struggling to fight bosses, collect eggs, and whatnot. The end goal was not in sight. Then there was a shift. One wave on Gone Fission Hydroplant it struck my once-tired brain that if we just killed each boss before they had a chance to pile on more, the usual chaos of Salmon Run would be reduced to a simple boss rush... kill one after the other.

This tweaked my mental model.
7

Close reading / Into the Black: On Videogame Exploration

November 17, 2022, 04:28:02 PM
Regarding Theories of Everything with Curt Jaimungal's
"Michael Levin on Morphogenetics, Regeneration, Consciousness, and Xenobots"
9

Close reading / Theory of the Gimmick

Quote from: Summary/Review on torontopubliclibrary.caWith its promises about the saving of time; the reduction of labor; and the expansion of value, the gimmick gives us tantalizing glimpses of a world in which social life will no longer be organized by labor, but also of one regenerating the conditions that keep labor's social necessity in place.

October 24, 2022, 09:22:13 AM
in what are the stakes? i concluded with the grand realization that "other people might play for different stakes than i would!"

today i'm recording the follow-up thought that there are patterns to be discovered. that is, at a large enough scale, people are predictable. from a Monopoly Rules standpoint, it's very exciting to think about this pattern:

what will people want to stake, and on what, that they currently aren't able to?
this is just a different lens on 'what game will people want to play?' but i think a very insightful and useful one... for me at this moment, anyway. it's more precise than feelings but is subjective and personally meaningful in the same way. if someone feels accomplished when they collect coins, all i know is that if i put coins in, they will make that person feel accomplished. but if i think about it through the lens of stakes: a person wants to feel rich by collecting lots of coins? (this is an awful, truly terrible example) then i can design the game to play up those stakes.
- offer expensive items that the player wants, but cannot afford yet. (the feeling of "not rich yet, but perhaps being rich is possible". deprivation.)
- reward the player with unexpected coins

Primordial soup / what are the stakes? (stream of consciousness.)

October 23, 2022, 08:19:29 PM
enact a system. touch buttons for some reason? make the things go higher. make the things change.
watch as the world shatters.
embody yourself. what do you care? who do you care about?
what makes something important? fragile?

these games have to be local multiplayer but perhaps not in the traditional sense.

think about The Well-Played Game again. we can play with stakes, if everyone opts in, if everyone is a good player.
does it make sense to let the players opt in to stakes later?
like, you play a "not for real" game, and then you play it for stakes, later, when you're ready.
that sounds reasonable.
consider how Space Alert has optional permadeath.
consider that.

what makes something important, anyway?

how do i feel about that?

how do i feel about that?

how do i feel?

we ask the player,
treat this system as if it is, has the scent of, the important thing that you mustn't play with, but which here we are in fact giving you license to play with it. this is a bank: steal from it. this is a bad person: overpower and kill them. this is a small animal: capture it and put it into a tiny ball.

these stand-in systems are surrogates for real engagement with the world, the messy difficult world, the important world.

i'm right back where i started.

perhaps the impulse is wrong in the first place.

a nice constructed desert i want to exist in a while,
but the prescribed and arbitrary task-based scavenger hunt gameplay pattern
is not worth my time to engage with.
made it to 9:45 AM.
17 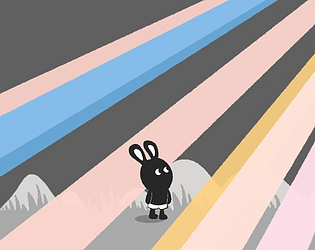 October 13, 2022, 02:45:36 PM
regarding Milind M. Lele's
"Monopoly Rules"
(subtitle: How to find, capture, and control the most lucrative markets in any business)
I picked this book up at the library on a whim. It was just sitting there on display. I picked it up, then put it down, thinking I should find another not-on-display copy. Of course it was the only copy at the library; what do I think this is, a bookstore? So I went back and checked out the only copy at the library.

I happened to have played Monopoly the other day (Sunday, Thanksgiving), so it caught my eye. Monopoly Rules.

Also the book was very shiny.
19

Reviews & reflections / i was a teenage exocolonist

Ego and Emotion / Ownership and Acknowledgement

October 10, 2022, 02:49:58 PM
Work at Messhof is less satisfying than work that I do individually, and I have been trying to figure out why. I'm not sure "Ownership" is quite the right term, but I'll use it here as it refers to "My Work." When I make something, it is "mine" and I can see how feedback regarding it applies to "me" and I can learn, I can learn what to do better next time, I can feel the feedback unambiguously. Likewise I want to give someone feedback! I want to talk to the artisan responsible and trust them, trust that they are engaged in the pursuit of something, that they are going to get there. In a project with many people I've found these things run together. My work becomes our work, Our work becomes your work, Your work becomes my work again.